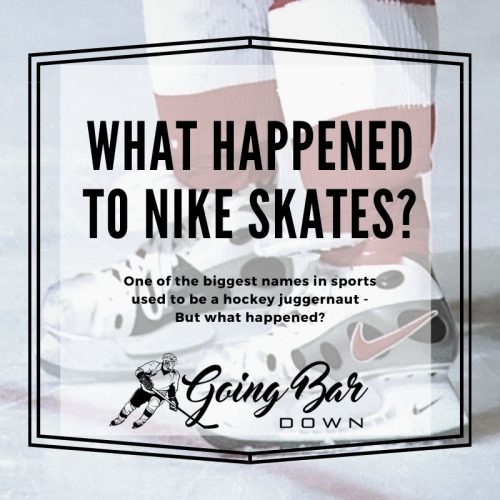 Decades ago Nike entered the game of Hockey, determined to make an impact and grab a chunk of the growing market. They left a mark but eventually exited and sold off their holdings for a big loss. What transpired along the way? What were their greatest products? Where can we get some of those crazy bubble skates? These are all questions we will dive into as we explore Nike’s brief but impactful stay in hockey.

When Did Nike Enter The Hockey Market?

In 1994, Nike bought Montreal’s Canster Sports, who manufactured popular hockey lines such as Bauer and Cooper. Who doesn’t remember the epic Cooper-All shoulder pads from back in the day?

Canstar had over 1700 items at the time of Nike’s acquisition, and gave the sports juggernaut a fast track to all the most cutting edge technologies in the sport of hockey. In-line skates and the sport of inline hockey was booming in the early 90’s, with the number of inline skaters reported to have increased from 2 million to 20 million by from 1990-1994. Nike certainly wanted a piece of this pie!

In 1994 Nike purchased Canstar for a whopping $395 million dollars. This was 50 percent above the companies publicly traded valuation, meaning it was a massive overpay – Nike obviously thought there was growth in the future! It was Nike’s largest acquisition to date. Nike promised to remain hands off and leave Canstar to its own devices as it grew its business.

Nike burst into the Hockey scene with some.. let’s say.. interesting skate designs. First up was the Nike Air Accel skate. A bubbley black and white eye catcher that bucked the trend of the plain black skates of the day. Users from back in the day reported that they were heavy, held water in a bad way, and broke down easily under heavy play. But man – did they look cool! Who didn’t want to be like Sergei back then?

A generational talent, scoring goals at a rapid pace and an elite skater, Federov was the perfect fit for Nike’s newest division. Nike of course followed their gear debut with some hilarious commercials that we’ve all come to expect from the company over the years

By 2004, it was estimated that the inline skater base had declined from a peak of 32 million in 1998 to 17 million in 2004. This is a massive decline almost right back to where it was at when Nike purchased Canstar in the mid 90’s. Anyone with some business sense can see this is certainly less than an ideal situation.

The popularity of skateboarding is one of the reasons people believe inline skating saw a decline. I certainly remember in the mid to late 90’s everyone had a skateboard of some kind, whereas only people I knew who played hockey were likely to have a set of inline skates.

Nike was also suffering from issues with the quality of its equipment. Retailers were getting a much higher than normal amount of returns over poor fitment, and eventually Sergei Fedorov cut ties with the company as he echoed that sentiment.

In 2005, Nike merged all of its hockey offerings into one brand – Nike Bauer. Selling in over 9000 stores in 35 countries at the time, Nike figured that the co-branding could bring some success back to its line. They had athletes under contract such as Jarome Iginla, Martin St. Louis and Markus Naslund, all elite players and top snipers of their day so they had the star power.

Nike hoped the new branding would pay off as it was rolled out in time for the 2005 NHL season, the 2006 IIHF World Junior Hockey Championships in Vancouver, as well as the 2006 Torino Winter Olympic Games.

As far as Nike was concerned, the changes did not spur on enough success, and as of February 21 2008, Nike sold it’s Bauer Hockey subsidiary to an investor group Kohlberg & Company as well as W. Graeme Roustan for $200 million in cash. That’s a $195 million haircut, and when adjusted for inflation that $395 million would have been more like $573 million, so in fact they lost $373 million on the sale (not accounting for any profits during the 14 year ownership period, which would be hard to figure out)

What Happened To Bauer After Nike Sold It?

In early 2011, it was announced that Bauer planned to go public. Kohlberg Sports Group planned to sell 30% of its stake for $75 million, and a year or so after the IPO Bauer’s enterprise value was around $374 million. Not a bad return on $200 million!

Eventually Bauer was bought by Performance Sports Group, who went Bankrupt in 2016 / 2017. They still own Bauer as far as we are aware! Bauer has had a pretty tumultuous history since being acquired from Canstar sports in 1994.

What Happened To Nike Hockey Skates? – Some Of Our Favorite Pairs

And for my personal favorite line that I still wear to this day, the Supreme line. These skates consisted of the Supreme One90 and the Supreme One95. I remember when I switched from an old pair of Graf 735’s into the One95’s, it was like going from a work boot to a running shoe!

If you grew up playing in the 2000’s, you almost certainly recognize a few of these, either from owning them or from wanting to own a pair! My set of One95’s were a used set as I didn’t have the cash at the time for a brand new pair!

What Were The Best Nike Hockey Sticks?

There was some controversy around this stick – it was super light, high performing, but they seemed to break easier than any composite that had ever come back! People reported the sticks breaking in under a month regularly,

Many who gamed this stick back in the day look on it fondly, and I assume most of them had at least two, the first one they purchased and the second one when they broke it in the warranty period!

Conclusion – An Interesting Decade and a Half!

We hope you enjoyed our article! As you can see it was an interesting time when Nike owned Bauer. Roller Hockey looked like the next big thing, Then the creation of the legendary Nike Bauer brand, and tons of legendary commercials all the way through made it an awesome time to be a hockey player and experience some of what the brand offered. I think the sale was definitely best for both parties and to this day Bauer dukes it out with CCM for top spot in the hockey world.