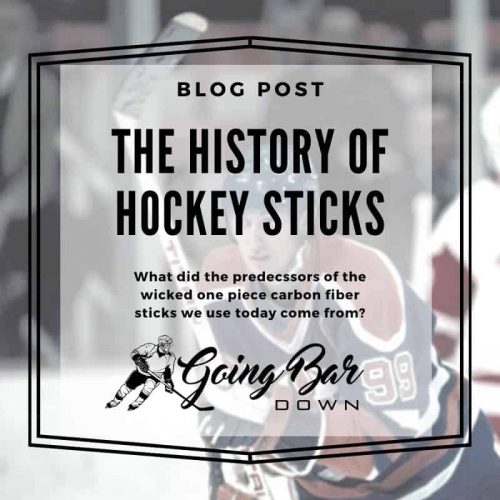 One of the most unique and ever evolving pieces of equipment in the game of hockey is the hockey stick.  From humble wooden beginnings, to incorporating curves, and finally the technological explosion of the last two decades yielding high performance composite sticks, the hockey stick has a very interesting past!

Our article will cover the original hockey sticks and their creators, how it evolved throughout the years, materials used to produce the sticks, and companies that have made major advancements in stick technologies.

The Origins of the Hockey Stick

Historians believe that the hockey stick (and the game itself) may have originated from the Mi’kmaq tribe of Native Americans who lived in Atlantic Canada around the mid 1800’s.  These sticks were made from Birch and Hornbeam trees, and the stick was originally called a Mic-Mac hockey stick.  Hornbeam was such a strong wood that it was often referred to as ‘ironwood’.

In 2006 a stick made by the Mi’kmaq between 1852-1856 was sold at an auction to an anonymous Canadian for $2.2 million dollars.  This stick at the time was recognized as the world’s oldest hockey stick.  The stick is currently valued around $4.2 million US.

Hornbeam supplies eventually began to diminish since they were such excellent materials for many products, and Yellow Birch and Ash began to replace Hornbeam as the main manufacturing materials.  Ash eventually won out over Birch and by the 1920’s it was the wood of choice for two piece wooden sticks.

The famous Canadian hockey company Hespeler began inserting the blades into a joint and glueing it to a wooden shaft.  Hespeler would eventually file a patent for their two piece design.

At this point in history hockey stick blades were still straight and had not been curved yet, but it is thought that Cy Denneny of the Ottawa Senators was the first to curve his stick into a ‘banana blade’ in 1927.  Despite the innovation this early, due to Denneny’s alleged unpredictable knuckler shots, the method did not gain any popularity in this era.

In this era the popular shots were backhands and wrist flicks.  Slap shots existed, but no one was going bar down at this point.

The Hockey stick did not have much of an advancement in technologies between the 1920’s and 1960’s.

In the 1950’s companies such as Sher-Wood and Canadien began making fiberglass wrapped blades a mainstream technology.  By wrapping sticks in fiberglass, companies began to use lightweight Aspen wood instead of Ash, lowering the overall weight of hockey sticks.

Although curved blades had been discovered before, the Chicago Blackhawks all time leading scorer and hall of famer Stan Mikita is credited with popularizing the practice of using a curved blade.

It is alleged that he caught his blade in a crack in the boards and broke it into a V shape.  He discovered by playing with this partially broken stick that he could get his shots off faster and they were more powerful.  Mikita and team mate Bobby Hull began working on and perfecting a method of curving blades – running the sticks under hot water and bending the blades in door jams.

As curved blades became more popular, shot velocities were increasing and shot control was decreasing.  The NHL was forced to implement rules limiting the curves of hockey sticks.  It was initially limited at a 1 inch curve in 1969-70, and soon after reduced to a 1/2 inch curve limit.

The 1970’s brought to the market one of the most popular sticks of all time, the Sher Wood P.M.P. 5030.  An Aspen core shaft with multi layer Birch lamination, and a White Ash blade crapped in impact resistant fiberglass, this stick was easily the most popular stick in the world, and is still a wonder to play with in this day and age.  What it lacks in lightweightness and response, it makes up for in puck feel and durability.

Around this era Canadian companies Sher Wood and Canadian dominate the market.  Moving into the 1980’s companies such as Koho and Titan entered the scene and gained traction in the stick market.

Due to Cricket and Baseball bat manufacturers experimenting with other manufacturing materials, the Hockey world was introduced to it’s first aluminium stick in the 1980’s.  This one piece aluminium stick was not very popular as it did not have a great ‘feel’.

To solve the issue of lack of feel on all aluminium sticks, manufacturers began creating aluminium shafts, and inserting wood blades in the bottom.

This proved to be a winning combination.  The aluminium shafts were strong, sturdy, and durable.  The wooden blades were cheap and easily replaceable.  The aluminum shafts also allowed manufacturers to create a very consistent weight and flex, something that wooden sticks had lacked up until this point.

The Aluminium shaft was made popular by the Great One himself, Wayne Gretzky.  Gretzky signed an endorsement deal with Easton to use their HXP 5100 aluminium shafted stick.  This move popularized the stick across the world and was the pinnacle of aluminium sticks in hockey. 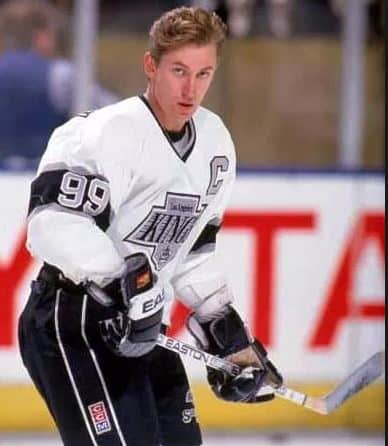 The aluminium wood hybrid sticks did not come without complaints, however.  Many complained that the sticks had a hard feel, and that the wooden blade still did not feel as good handling the puck as a full wooden stick did.  To address this problem, the hockey sticks greatest advancement was just around the corner.

The Evolution of the Hockey Stick - Two Piece Composites

In 1995 the first composite hockey blade was introduced.  Goal scorers such as Paul Kariya adopted these blades right away, and Kariya eventually had a 50 goal season a few years later using such a combination.  Anyone who is a big Paul Kariya fan or Might Ducks fan will remember the countless goals he scored using the Easton Ultra Lite composite shaft.

Real players in their 30’s-40’s might even remember the Easton Z Bubble, a shaft that was contoured near the bottom for a ‘flex’ zone to give an even whippier shot!

Eventually, composite shafts were also introduced to be paired with the composite blades.  This took the entire stick to whole new levels of performance never before seen.  People had light, responsive shafts, and light balanced blade for an overall excellent package.  The joining of the two however, never quite yielded the same feel for the puck that a one piece wooden stick such as the PMP 5030 offered.  In a few short years, this would all change.

Easton Synergy: The Hockey Stick Changes Forever With The Introduction Of One Piece Composites

In 2001, Easton Hockey released the first ever one piece hockey stick.  A beautiful reflective silver, it market the beginning of the era of one piece composites.  NHL’ers didn’t take to the stick immediately, with Scott Gomez being the first player to play with one full time.

The original Synergy was not only lightweight, but finally succeeded in capturing that one piece feel that was missing for so long with aluminum and composite shaft / blade combinations. 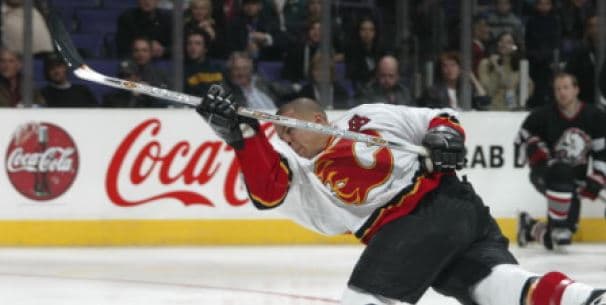 Other companies quickly jumped on the one piece bandwagon, CCM released the blue ‘Vector’ shortly after Easton, and TPS followed up with the one piece Response. 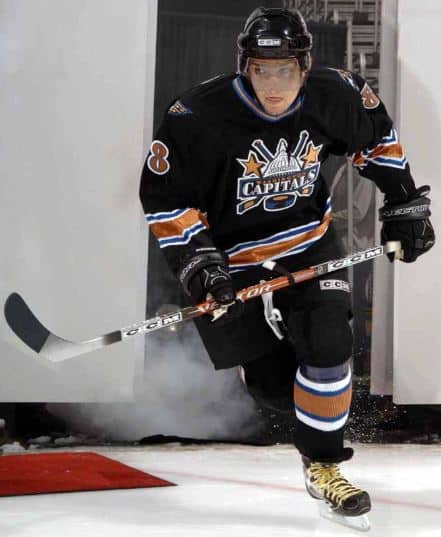 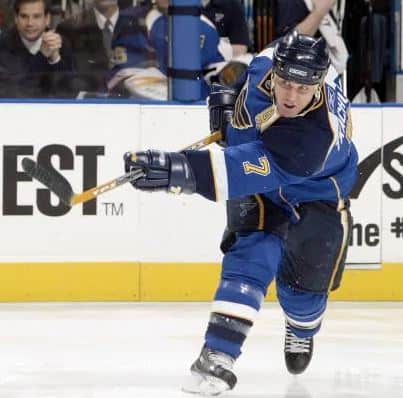 Easton Synergy Grip – The second Easton Synergy model, is was a gold color and had a grip on the entire length of the stick
TPS Rubber – A bright yellow stick, one of TPS’s most popular sticks of all time
Nike Bauer Vapor XXX Lite – One of the most popular one pieces of all time.  This stick was ultra light weight, and had amazing performance.  Due to cutting its weight so severely, Bauer suffered integrity and warranty issues and the stick didn’t hang around for long.
Easton Synergy Si-Core – The next evolution in the Synergy line, the Si-Core was an orangeish red color, and had silicone inserted in the blade to make receiving passes feel even more natural and like a wooden stick
Nike Bauer Supreme One95 – This was a very popular Bauer stick that went head to head with top of the line Easton’s of it’s era.
Easton Stealth – The successor to the Easton Synergy, the stealth was light as a feather at just above 400 grams, and was black along the shaft fading to grey along the blade

Nowadays (2021) four main companies dominate the hockey market, Bauer, CCM, True and Warrior.  You can even get one piece composite goalie sticks, or get your little hockey player a youth full composite stick too!  There are many startups and smaller companies trying to crack into the stick game, and there has never been a better time to be a hockey player in this regard.  Stay tuned for reviews from us at Going Bar Down on mainstream and independent stick companies!

Please drop a note at the bottom if you can think of amazing sticks you remember from days past and we will add it to our list!

22 thoughts on “The History of Hockey Sticks”