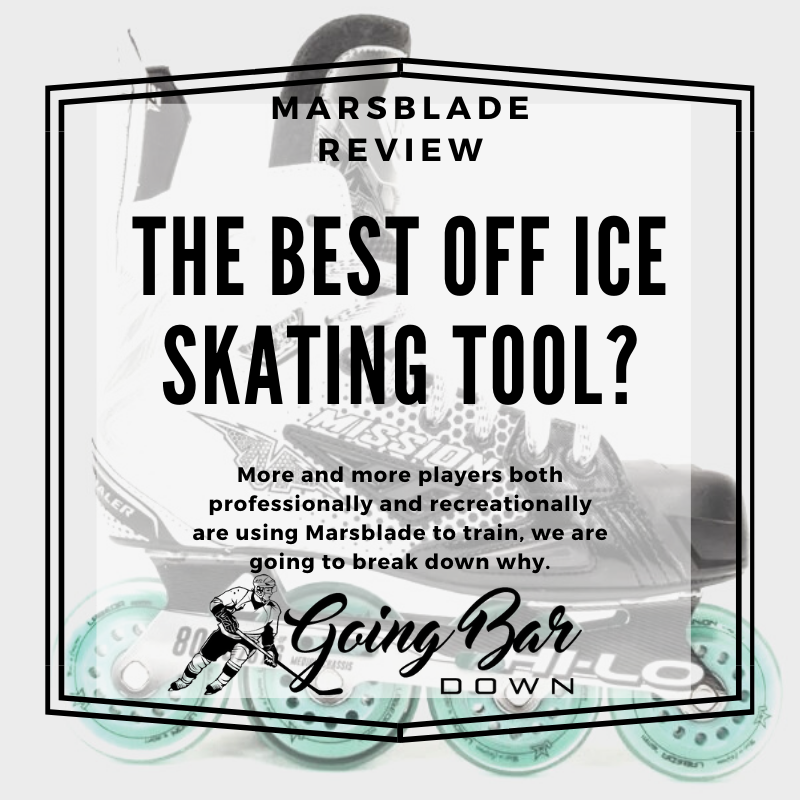 You have probably already seen or heard of Marsblade as the revolutionary new roller blade that essentially simulates on ice skating. It is being touted by a lot of NHL players as an essential piece of their off ice training programs, being that the game is getting so much faster and skilled each year.

The key difference between Marsblade and the standard inline hockey skates is the rocker system, that allows all four wheels to stay in contact with the surface longer. This enables players to simulate tight turns, crossovers, and transitions from forwards to backwards much like they would happen on the ice.

There are Marsblade skates for roller hockey players, but they also have an off-ice skate designed to replicate the feeling of skating on the ice. This is perfect for ice hockey players that are looking to improve their training regime in the off season. Stickhandling flat footed improves your hands, but you still need to practice doing these things in motion which is where the Marsblade off-ice skate helps players a ton!

Marsblade has also come out with an on ice holder that uses the same patented Flow Motion Technology to increase motion between the blade and the boot of the ice hockey skate. The principles are the same, keeping the blade on ice longer and increasing your explosiveness. 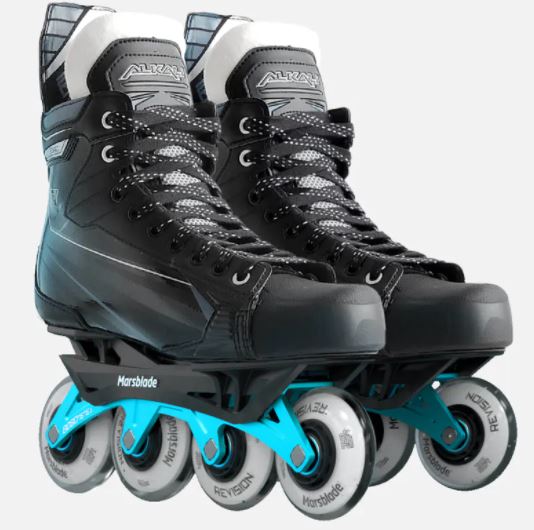 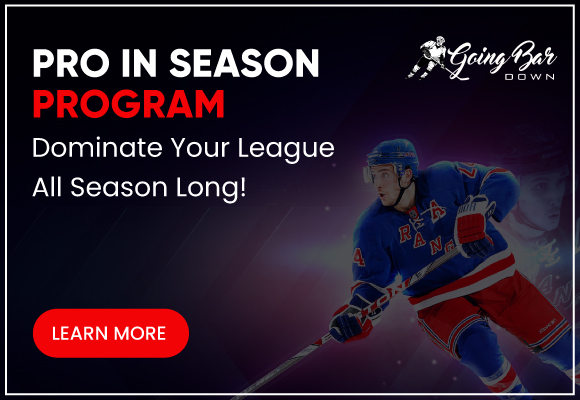 Want to see our complete round up of all the top inline hockey skates out right now?  Click here to take a look!

The aspect that sets Marsblade apart from other roller hockey skates and skate holders is their patented Flow Through Technology. With traditional skates, both roller and ice hockey the boot and holder are connected with no ability to move. So when you leave forward on your skates, usually the back of the skate will lift up.

Marsblade skates have implemented a unique technology to improve the contact of the blades to the ground, with a rocker that will transfer your weight without lifting the skate off the ground. This has helped players of all skill levels improve their skating off the ice, or while playing roller hockey. The Flow Through technology has also been implemented into an on ice chassis, so you can take the same principles to your on ice games as well!

The stiffness and amount of rocker the Marsblade offers can also be customized to each individual players skating style, so you will easily find the setting that is suited to your style. We have found that there are two main advantages the Marsblade offers to hockey players that traditional skates and roller blades just don’t offer. 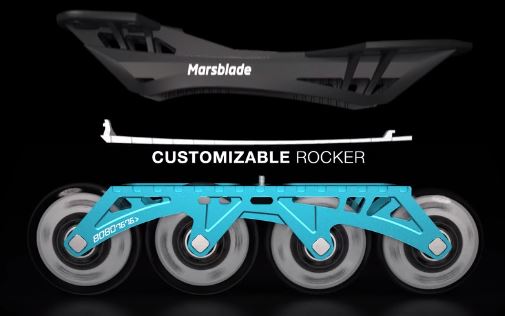 One way to gain skating power is obviously with off ice strength training, but technology improvements have also helped to accelerate your gains on the ice. The Marsblade rocker improves your power by keeping the blade on the ice longer, increasing the area that you are transferring power to.

This directly translates into better acceleration, both from a stand still and also coming out of turns. The Marsblade rocker will actually tilt as you transfer your weight, allowing the skate to keep in contact with the ground/ice giving you better power in your stride.

How you are able to gain more explosiveness from your turns both on and off the ice come from the same way you gain more power, your skate is in contact with the ground longer. This improves your control and ability to power out of turns quickly, which translates into more goals and space on the ice.

Every player has tried to do a tight turn and fallen because the front skate slips out from under you because you lose contact with the ground. The Marsblade rocker fixes this problem because it enables your boot and blade to “rock” in order to keep the blade on the ice while you are transferring your weight. This makes controlling your turns and strides much easier, which gives you a massive advantage in the game.

Wondering about True Pro Custom skates? Check out our detailed review on if they worth the investment!

Nikolas Kronwall is one of the smoothest skating defenseman to play in the NHL in a long time, so hearing his honest thoughts on using Marsblade skates was very insightful.

The biggest thing he noticed was how fast he gets in and out of turns, and how it has also helped his transitions. The Marsblade helped him maintain his speed, and we’re talking about one of the best in the game. When you are playing a high level, creating time and space is the difference between a successful play and the defender stopping you.

The Marsblade difference is real, and whether you’re using them on or off the ice they will help your skating immensely.

Marsblade - What is included

Since the Marsblade skates are customizable, you get a couple of different things when you buy a pair to help you find the perfect setup that gels with your skating stride. You can also buy all of these options in a full kit if you are looking for a new pair of roller skates.

Marsblade Boot – The off ice chassis can attach to your regular skate boots, or you can get the complete off ice skate kit which has everything included. The roller hockey Marsblade skates also have an Alkali boot with the chassis included.

Marsblade Chassis  – The chassis is the key piece as this is what implements the patented Flow Through technology, and you even get an extra in case one is damaged during a game

Rocker Inserts  – These inserts are what you will change out to get the setup you desire, as each will allow a different range of mobility for the chassis.

For how new a technology this is, it actually comes in at a very reasonable price point compared to buying a brand new set of skates. There are a number of different options and we’ll break them down in the table below!

If you think of how much some of the summer hockey schools and buying ice costs, an off-ice product like this that can simulate on ice skating pays itself off really quickly. Using this on a basketball court with a net case really take your puck handling training and shooting training in the off season to a whole other level!

The Marsblade sizing goes off Bauer and CCM skate sizes, so it is important to remember these are not shoe size! Typically, your shoes are 1.5 sizes bigger than your skates will be (why they don’t make them the same I don’t know). Marsblade has an in-depth sizing chart linked here, but ordering 1.5 sizes less that your U.S. shoe size is a good rule of thumb.

As with any kind of true hockey skate, it is important to bake these skates to get the best possible fit. The Marsblade off-ice skate is no exception, it will ensure your foot and skate fit together like a glove.

There is a big reason why some huge NHL players are investing in Marsblade and using it both on and off the ice. You’ve probably seen the commercials with Auston Matthews ripping around off the ice using Marsblade, as he has recently joined the Marsblade team.

The patented technology that significantly help simulate on ice conditions off ice, can’t be ignored as a way to improve in the summer when you can’t get on the ice. It will improve your acceleration, explosiveness, and skating control. We definitely recommend the Marsblade as one of the best ways to work on your skating skills off the ice, and should be incorporated with your off ice training program!

Check out some of the reviews from customers below.

Great product, fit up to my rbk pump skates quite well. Only thing I would like is a "Marsbrake"... Option. I skate down streets and sidewalks quite often, and it would be a lot nicer option to stop quick on poor surfaces.
Clark - Marsblade Customer
My kids love them. Easier to turn and pivot vs traditional roller blades.
Wayne - Marsblade Customer
Purchased a set of the Marsblade 01 with wheels and bearings, for my son for his birthday to use during Covid. He loves them. Great for training to simulate on ice skating. Product is well made. Shipping was reasonable given the circumstances around the pandemic. Our shipment was missing a small part and they were quick to remedy. Overall the customer service and the product are very good.
Sean - Marsblade Customer
Previous
Next

Drop your email below in order to have us send you all the latest article updates and sales from the biggest stores and brands directly!

Disclosure: Some of the links above are affiliate links, meaning, at no additional cost to you, we will earn a commission if you click through and make a purchase. Please review our Privacy Policy and contact us if you have any questions. All rights reserved

Win a dekerbar By super deker

From the creators of the Super Deker comes the DekerBar, a standalone stickhandling trainer that can be used alone or in addition to a Super Deker system!

Enter your email below for a chance to win! Winner announced at the end of April 2022