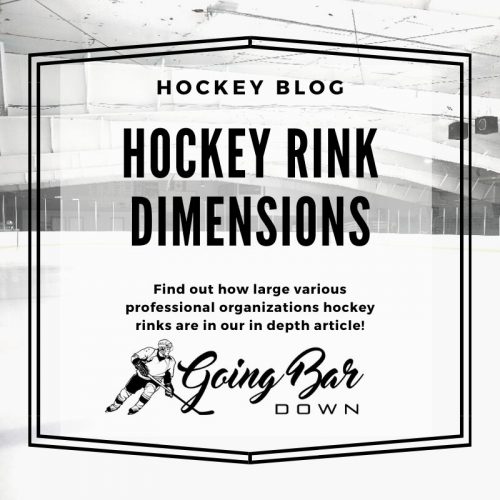 One of the most unique things about this wonderful game is also something we pay little mind to when we step out on the ice – the rink itself!  Many people are curious about how large a hockey rink actually is.  I wish I could sum it all up in one sentence but the answer is a little bit more complicated than that!  Read on to learn all about the various size rinks that exist and what leagues or federations they belong to!  If you are curious about some of the basic rules of hockey, check our guide on them out!

The first rink we will discuss is the standard North American ice surface.  All NHL arenas will have ice sheets this size, and leagues such as the AHL, ECHL, WHL, OHL, and QMJHL all strive to have their arenas conform to NHL standard sizing.  Despite this – every NHL arena has its own characteristics as some NHL players discuss in this article.  But back to our article!  The basics of an NHL rink’s dimensions are as follows:

The standard NHL rink is definitely the smaller of the two rink sizes we will go through.  In the past this led to a rougher, bigger mans league with huge hits every period being the norm.  In the last 5 years there has been a shift towards speed through a crackdown on hooking, headshots, and blindside hits.

The NHL has done studies which show that over 70 percent of game time is spent in the end zones.  This is why they prefer a smaller neutral zone and a longer end zone to allow for more free flowing play. 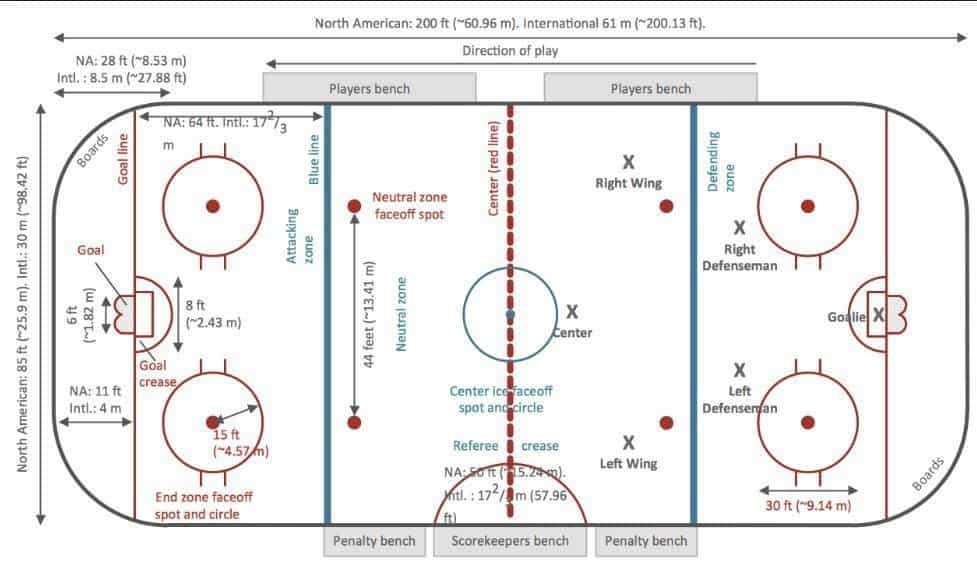 The second ice rink size we will go over is the Olympic ice or International ice size.  These rinks typically follow the International Ice Hockey Federation (IIHF) guidelines.  This size of rink is most popular in Europe and Russia and is used in the IIHF and the KHL, SHL, DEL and DM-Liga.  You will also find Olympic ice sprinkled amongst most major Canadian cities used for international training and often used by college teams.  Here are the major dimensions –

Olympic hockey tends to be a much more flowing game with the larger ice surface.  Although in reality it is of very similar speed compared to the NHL, it may appear to be a slower game on television.  More area leaves teams more room to move the puck around with less congestion.  The wider ice but shorter offensive zones means you will see alot of side to side passing in international compared to the NHL, where teams like to move the puck from behind the net to the defense and around quite often.

The Neutral Zone on Olympic ice is also larger than an NHL neutral zone which further lessens congestion and helps teams complete defensive zone to offensive zone transitions without as many giveaways.

A smaller rink in the NHL is a main reason you will see many saucer passes made to get around defenders.

Differences Between NHL and Olympic Ice

There is some controversy around the use of NHL ice and Olympic ice in the Olympics and international competition.  The NHL is considered to be the best hockey league in the world, attracting top talent and paying the biggest salaries.  NHL players were allowed to participate in the Olympics from 1998-2014.  The easiest way to sum up where this controversy comes from is the following –

As you can see, except for the 2014 Sochi Olympics, there is a definite trend of Canada and USA teams whom have 100% NHL players dominating on NHL ice, whereas in international ice the European teams which typically have more of a mix of NHL and International players do better.

There are obviously a thousand more variables, such as in 2006 when Canada was later accused by hockey fans and critics of fielding an older team and leaving off budding superstars such as Sidney Crosby… but that’s the fun in it all!  We will let you decide and comment below with your thoughts, Thanks for reading the article and we hope we answered all your questions!