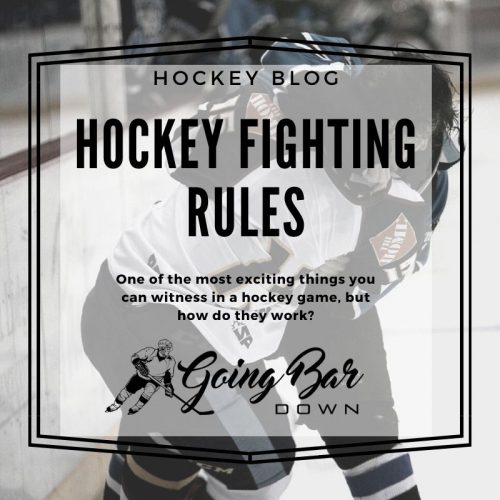 One of the most controversial topics in hockey is fighting, with some fans believing that it should be taken out of the game while others wishing there was more of it. We’re going to break down the rules of fighting in hockey so you can understand exactly why a fight might occur and what the consequences of it are!

Why Do People Fight In Hockey?

Fighting in hockey is something that leaves alot of people scratching their heads.  Why do people do it?  What could cause a fight?  How is this allowed?  There are typically two reasons you will witness people throw down and fight in hockey.

The ‘enforcer’ position in hockey is not as common as it once was.  George Laraque, Bob Probert, Tie Domi, Donald Brashear are a few of the more notable enforcers.  These were players who were not the most skilled, but were tough, physical, and always down to fight.  In the good old days, two enforcers would be put on the ice at the same time, quickly exchange a few words, and square off.  Why?  A fight pumps up the crowd and your team!  You can literally feel the energy in the building after a good fight, and this is what the enforcers were looking to do.  Check out this video of Tie Domi and Shane Corson going at it – you can practically feel the energy in the building!

Hockey is a physical, fast paced sport.  Sometimes players make split second decisions, and sometimes they are the wrong ones.  Blindside hitting someone, getting your elbows up on a hit, get your knee out on a guy, slash someone in an area they have no protection – any of these can infuriate players in the game as they might feel someone was trying to injure them.  Hockey has lot’s of unwritten rules and one of them is – if you take a cheap shot be it accidental or on purpose, you should answer the bell for a fight!

Situations like these are when you see normal players or even superstars fighting.  Although team owners will get nervous when their best players drop the gloves as they risk a multitude of injuries, these unscripted, heat of the moment fights are undoubtedly the most exciting!

What Happens After A Fight?

After a fight concludes, if there were no penalties before or after, Both players receive a 5 minute major penalty and head to the penalty box.  Both players must sit in the box for their full 5 minutes, and once their time is served they are allowed out and may continue playing.

Sometimes extra penalties can be given, for example there are instigator penalties occasionally given out to a player if he starts a fight without justification.  A situation this is occasionally seen in is if a really big, but clean hit is delivered, a fight may break out.  The team who’s player got hit and then tries to start a fight for retribution can be given an extra two minute penalty for instigating, since big clean checks are not illegal and therefore not a free pass to start a fight!

Can Goalies Fight In Hockey?

If you ever witness a goalie fight, consider yourself lucky – this does not happen often!  It is quite the sight to behold, two goalies in their massive equipment, throwing punches at center ice!  Goalies are indeed allowed to fight in hockey – well – sort of.  If two goalies leave the crease to fight, they will likely be ejected from the game.  Also if goalies leave the crease during altercations, they should be given a two minute penalty as well per the NHL rule book.  Once the goalies are ejected, the backup goalie must come in in their place to play!  Here is a clip of the most recent goalie fight – Mike Smith vs Cam Tablot!  Who do you think won?

What Is A Line Brawl In Hockey?

A line brawl is a rare occurrence in today’s game, and this is because the game of hockey does not want to be seen as some form of a fighting sport.  Very rarely however, when two teams are in a heated game (think of rivalries – Calgary vs Edmonton, Toronto vs Boston, Washington vs Pittsburgh) every player on the ice may square off in a fight.  This means you will see five separate fights taking place at once!

As previously stated this seen less and less in today’s game as the NHL in particular is trying to phase it out for player safety reasons.

What Is A Bench Brawl In Hockey?

Even rarer than a line brawl is a bench brawl!  This is when the entire bench clears and the whole team fights!  As you can imagine, this does not happen often and is basically pure chaos.  Hefty suspensions are typically handed out as leaving your bench at any point to fight is one of the worst offenses a player can commit from a rules standpoint.  Bench brawls happened occasionally in the past but you will likely never see one these days in professional leagues as teams cannot afford the suspensions nor do they want the monetary fines that will be levied on them!

The Unwritten Rules Of Fighting In Hockey

You might think that when a fight breaks out, it is a no holds barred all out affair, and in some cases you would be right!  However there are a few unwritten rules of fighting in hockey – a gentlemans agreement of sorts!  Here are the main ones –

#1 – Once a player falls to the ice the fight is over
This rule is generally respected in each and every fight.  A player may fall to the ice from being knocked out, getting off balance, or being fatigued, but once they hit the ice, the fight is done!

#2 – Both players should be ready to fight
If one player attacks another before he is ready to fight, this is viewed as a cowardly move.  This is less of a fight, and more of jumping a player.  In most fights you will see players square off or tie up initially signalling that they are both ready to go

Is Fighting In Hockey Safe?

Fighting in any form can be dangerous for several reasons.  Immediate risk of broken fingers, hands, wrists, jaws, or injuries to the eye are all possible.  For this reason you rarely see star players fighting as their coaches and team mates know they are worth more to their team on the ice than in the box!

The second danger of fighting, and a reason it is becoming less and less prevalent in the NHL is CTE, or Chronic Tramautic Encephalopathy.  Although moreso at the forefront of the NFL or professional boxing, CTE is possible in any sport where head impacts exist.  Several hockey players that were enforcers have reported issues with focus, memory, and overall health since retiring from hockey.  Daniel Carcillo is one of the main people dealing with this in the public eye, and is seeking advanced treatments to try and offset the brain injuries he has likely suffered!  Fighting and body checks to the head are being discouraged more than ever, as player long term health has to be taken into account!

All in all, fighting in hockey is definitely not safe, nor encouraged.  Even moreso in minor hockey or adult recreation hockey, people can get seriously injured when they are not trained to fight.  No one wants to go to school or work the next day injured because they couldn’t control their temper.  However, if you play in a league that allows fighting, sometimes it is inevitable and a good old fashioned fight will sort things out quickly and efficiently.  But for your brains sake, try not to make a habit of it!

We hope our article on fighting has helped you understand its place in today’s game.  It can be very exciting to see a hockey fight!  Enjoy them now as there are fewer and fewer as time goes on.  We aren’t against fighting here at Going Bar Down, and some might complain that hockey isn’t as tough as it once was, but really the issue is that players want to live a long healthy life after their careers, and in our opinion, deserve to do so!

Need a new hockey stick?  Check out our review of all the top hockey sticks available today!

Drop your email below in order to have us send you all the latest article updates and sales from the biggest stores and brands directly!

Disclosure: Some of the links above are affiliate links, meaning, at no additional cost to you, we will earn a commission if you click through and make a purchase. Please review our Privacy Policy and contact us if you have any questions. All rights reserved